Experience backpacking love to introduce you to new and experienced travellers sharing their experiences with our readers.

With great pleasure we introduce Josh Clement-Sutcliffe from my seasoned travels.

Josh will be sharing his experiences of a recent visit to Deepest Darkest Peru.

You will find Josh’s bio at the bottom of this post, over to you Josh, we loved reading about this trip!

It was only when I accepted the bowl I realised the mistake I had just made… This really is going to be an adventure in deepest darkest Peru!

My Peruvian friend had told me about the traditional way they make Chicha by chewing corn and spitting it out into a container.

The recently chewed corn spit is now left for a number of weeks to ferment producing an alcoholic drink.

Now I’m normally one to love trying new things, hell I’d tried a grilled maggot that morning. But drinking someone else’s spit just seemed like a step too far in my eyes.

When I was offered a traditional Amazonian drink I said “I’d love some”. (Being British it felt rude to give the bowl back without drinking it.)

I wanted to get it over with as quickly as possible so I downed it, Judging by their faces, I don’t think I was supposed to.

I met my Amigo while we lived in a flatshare in Melbourne and had been trying to learn Spanish for a while at that point.

I even took Spanish classes while staying in Bogota with my step sister just a few months earlier.

I’ve always found the Latinos I had previously met as very chilled and easy to get on with and found their love to dance and party very infectious.

We quickly became close friends and so after he had moved back to Peru and invited me to stay with him, I bought my ticket instantly.

He had just started a new job though and in Peru it meant that he wasn’t allowed to take any holiday for the first year.

This meant we only had a weekend to spend outside of Lima, which wasn’t long enough to journey to Cusco before climbing towards Machu Pichu.

We had to be more creative to get on an adventure together. For all his friends and family there was only one choice, Iquitos.

Situated deep within the Amazon, Iquitos is the Capital of the Peruvian Amazon and the countries ninth largest city.

So deep in the Amazon, Iquitos is the largest city in the world and only accessible by boat or plane.

Iquitos is kind of like the opposite of Rome, as literally no roads lead there.

On the two hour flight from capital Lima the second hour made me realise just how isolated this city was.

You fly for an hour and see nothing but the lush green canvas of the rain forest which is truly spectacular.

I Arrived late on a Friday night but luckily had enough time to go out to see the nightlife and have a couple of quick drinks in the city.

While outside a bar we were forced to confront a darker side of the city. There was a protest against the cities child sex trafficking trade, not surprisingly causing a lot of harm to the local community.

Iquitos is a tourist hot spot, but there in front of us we were forced to contend with a darker vein of tourism that runs through the city.

View of the dock from the river

We had to have an early night though as we needed to be up early in the morning.

We Met our tour guide at the docks at 8am and walked through a fish market to our boat.

On the boat there was a whole host of different foods that I have never seen before.

One delight was a grilled fat white maggot on a stick which the tour guide said was his favourite. It was tough on the outside and difficult to break, but when it did it burst inside my mouth. Let’s just say I i am not a fan of spiked popping maggot!

Being with a Peruvian definitely felt like we got different treatment as I was the only gringo on our boat compared to the tourist ship docked next to us.

Now I felt like I was heading on the adventure I had been looking for.

While cruising along the river, we began to turn off and head up some of its estuaries.

As these tributaries got smaller, the wide river meandered into frequent bends and turns.  This route offers amazing views of the Amazonian mangroves as well as it’s unique wildlife.

We were able to see Piranha, which are much smaller than I ever anticipated for such a ferocious fish with an even bigger reputation.

Also we saw caiman and were fortunate enough to get a fleeting glance of the dorsal fin of an Amazon river dolphin on our journey to see meet the indigenous people still living in the jungle with traditional means.

The tribe lived in a way which I was expecting, in multiple communal buildings shared by all, as opposed to individual abodes.

What struck me was the instant sense of community that the people we met seemed to have.

This was not surprising when you consider that they share sleeping spaces and divide the work between themselves.

It did feel like this sense of togetherness, all depending upon and trusting one another for their survival.

This is something that we are distinctly lacking in our modern and fractured political landscape.  Almost the antithesis of what the west currently seems to be living through.

It would be easy to dismiss these peoples lives as primitive, but also possible that they were living a more fulfilling human experience, devoid of the current loneliness epidemic.

Getting involved in tribal tradition

While we were there with them, we were treated with some displays of their traditional dancing.

Just like all the rest of their daily activities in deepest darkest Peru this was a group activity.

It involved groups in the middle, moving back and forth to the beat. Others people circle around them and it was very enjoyable to watch.

I even got the chance to participate and succeeded in not embarrassing myself too badly.

The tribe even showed us the way in which they hunted animals in the forest canopy by blowing darts through a long tube.

How hard can it be right? I mean, your just blowing through a tube.

It turns out to be very difficult, accuracy was of course challenging but I hadn’t considered it takes lungs the size of Pavarotti just to give the dart enough oomph to be able to do anything meaningful. 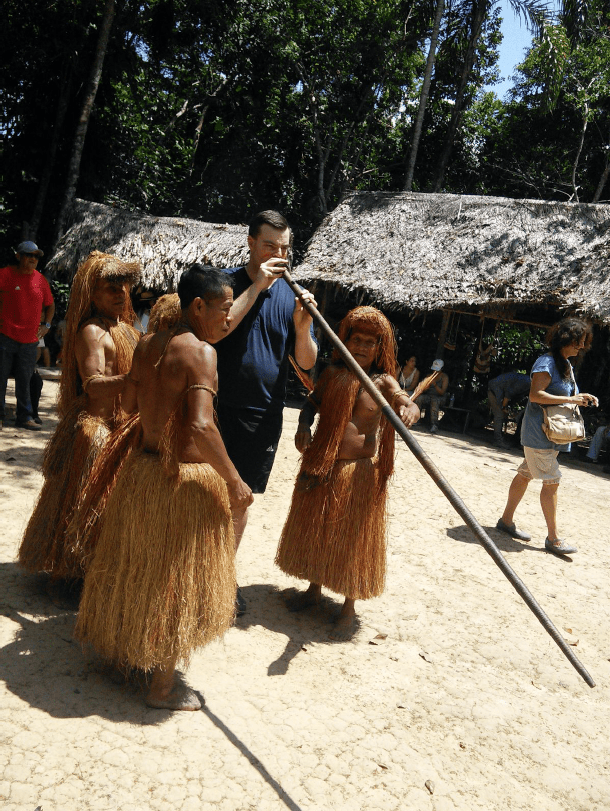 The dancing and shooting darts were a lot of fun, though we had more mixed feeling about the food and drink that we tried while we were there.

It goes without saying that the people living next to the Amazon river have an amazing array of fresh fish.

They were roasting it on a hand made barbecue made from sticks and the fish was not surprisingly delicious.

Cooking fresh fish from the Amazon

But then it was time for the aforementioned Chicha

Traditionally Chicha was a drink for the Incan upper classes and is sometimes used by royalty in religious ceremonies.

Chicha is similar to skimmed milk in texture and slightly more translucent in colour.

On this occasion the Chicha had been left outside so it was warm and had a strong smell of fermentation. Let’s just say I wasn’t a fan.

Reflecting on my experience in deepest darkest Peru

Going to stay in the Amazon was an eye opening experience for a number of reasons. Iquitos is a fascinating city and being so isolated from the rest of the world creates a very unique culture there.

As life is so dominated by the river and the rain forest, the people that we encountered had a fascinating relationship to the fauna of the region.

It wasn’t uncommon to see people with all types of animals from birds, monkeys and sloths. What was even more amazing though was how comfortable these animals seemed to be with the people they were with.

While this was also the case with the tribe that we were lucky enough to go and visit.  Seeing how human communities function like this was truly fascinating.

I recently read that between 2008 and 2017, the numbers of suicides and depression has doubled over the period.

I’m sure that we all know at least one person in our lives currently feeling very lonely and isolated.

So seeing how humans can both live and thrive in these communities was great.

The antithesis of our connected online world, which in turns only makes us feel further apart.

Josh is a member of My Seasoned Travels.

My Seasoned Travels are a group of adventurers, photographers and seasoned travellers sharing their tips, trips and stories from around the globe.

This site uses Akismet to reduce spam. Learn how your comment data is processed.